Building Movement Solutions
The products and advice presented within this handbook aim to help designers of buildings to make provision for the deflections that the structure will experience over its service life. Movement can arise from thermal expansion and contraction, wind loading, drying shrinkage, creep, settlement, column foreshortening and seismic events.

This introductory section discusses the causes of movement and gives some examples of typical mechanisms that are used to accommodate structural deflection.

This section seeks to distinguish between expansion joints and control joints as these terms are often confused. Its purpose is also to advise that fire barriers are required where expansion joints pass through fire compartment walls.

What are expansion joints?
Expansion joints are physical breaks in the continuity of construction. Physical gaps are left between building units to accommodate individual deflection of these units in response to creep, thermal variation, wind loading and seismic events.

Why do buildings move?
Aside from earthquakes the causes of structural deflection are creep, relative vertical deflection due to creep and column shortening and lateral deflection caused by short and long term drying shrinkage, temperature variation and wind sway.

Creep Deflection
Important distinctions must be made between instantaneous and long-term deflection, where long-term deflection is due to creep of the concrete. Creep is a feature of concrete elements under stress and can increase initial deflection threefold or more under constant load. Creep cannot be controlled, but its effects can be accommodated by careful detailing based on an understanding of the relationship between time and movement. 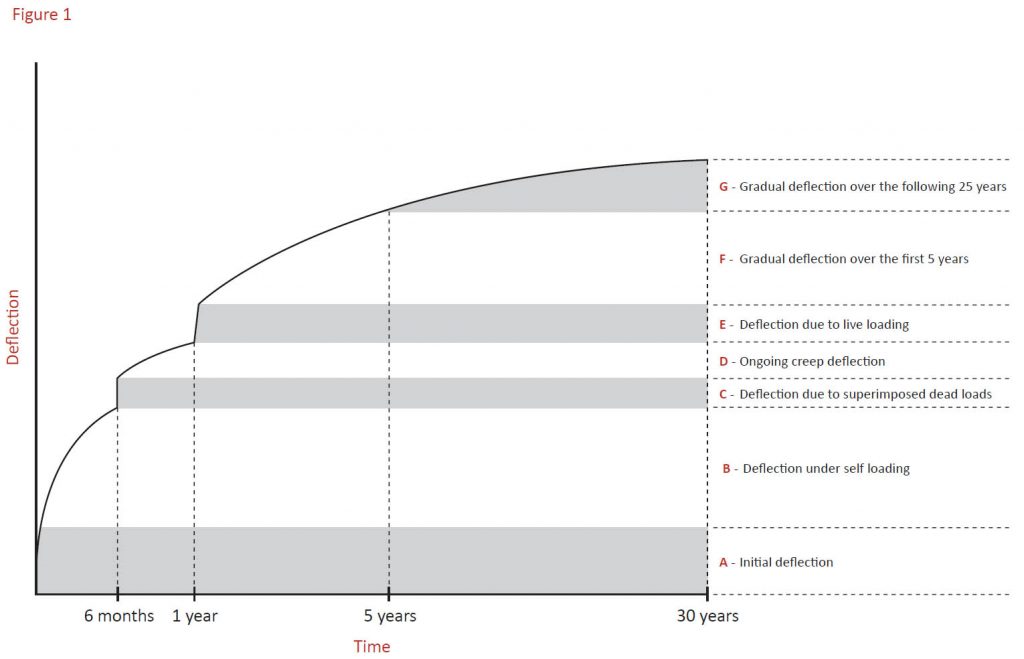 Figure 1 is a graphical representation of the causes and impact of creep deflection over the first 30 years of a building’s life in service. It shows how deflection in a slab or beam builds up over time. There is an initial instantaneous movement (A) as shuttering is removed, followed by a gradual increase in deflection (B) under constant load, due principally to creep.

Figure 1 assumes that superimposed dead load such as cladding and floor finishes are applied 6 months after the initial slab pour and these are shown as a small instantaneous increase in deflection (C) at that point in time followed by a further period of movement (D) under constant load.

It is further assumed that live load is not applied until 1 year after initial pour, whereupon the cycle of instantaneous movement (E) followed by a further period of gradual deflection over time
(F and G) is repeated.

It may be noted from Figure 1 that the rate of change of deflection with time reduces as the concrete ages and it is commonly assumed that after 30 years, all creep movement has taken place. However a further application of load may cause deflection beyond this timeframe